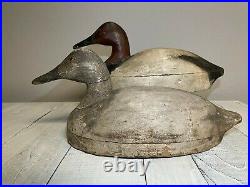 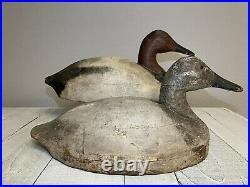 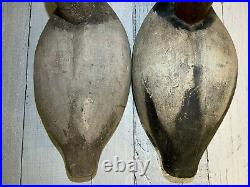 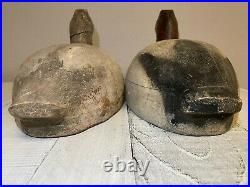 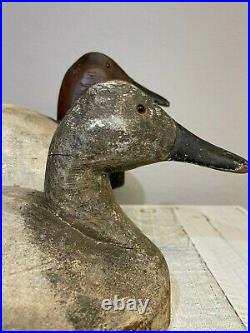 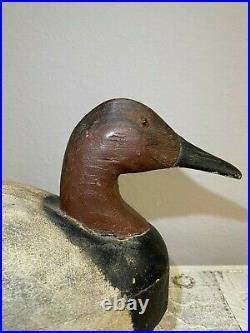 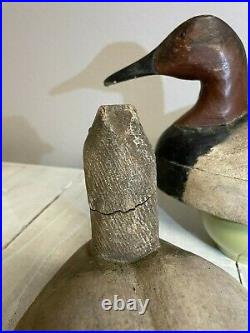 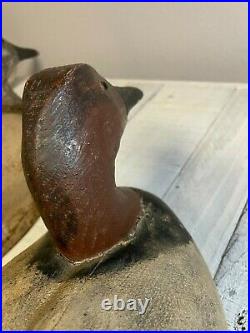 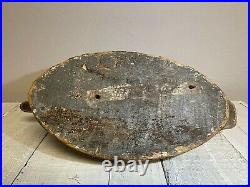 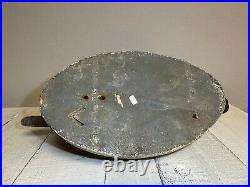 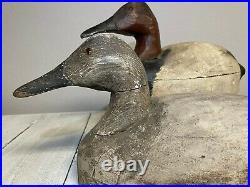 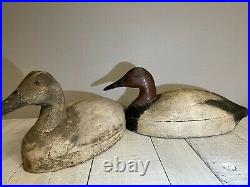 Feel free to message me so I can send scan pages from this book if needed for reference. All cosmetic conditions can be seen in photos, both have cracks on the neck - the drake is stable with very little movement, the hen moves left or right about 1/8 each way.

Appears to be a mixture of original and repaint. Credit to Michael Miller for the description from Wildfowl Decoys of the Pacific Coast: Leo Tocchini was born in San Lorenzo and grew up hunting ducks on Bay Farm Island across San Leandro Bay from Alameda. As a young man, Tocchini moved to Hayward and became a foreman for Auto-Lite Battery in Oakland.

He retired in the mid 1960's to concentrate on the decoy carving he had begun around 1945. He started his carving while still in Hayward, but continued after moving to Livermore about 1965. Tocchini carved Mallards, Pintails (his greatest output), wigeon, gree-winged teal, cinnamon teal, canvasbacks, and Canada and snow geese. Early on, he made a few birds of redwood, but then switched to the lighter and more easily worked balsa. This material was readily available at the end of the war, when Leo started carving in earnest.

Pete and Leo hunted together for years. He often put the club owners names or initials on the bottom of the birds - usually on the balance weights. Many of his decoys have his initials "LT" on the bottom. He not infrequently added his own heads when repairing the decoys of other carvers.

Tocchini spent many hours at Lake Merrit in Oakland studying the ducks and geese to improve his carving and painting. He used a band saw, rasps, some knife work and sandpaper to fashion his decoys. Leo used paints and glass eyes from Herter's and developed an easily recognized color pattern. The item "1940's Pacific Coast Canvasback Pair Vintage duck decoys by Leo Tocchini" is in sale since Sunday, April 18, 2021. This item is in the category "Sporting Goods\Hunting\Vintage Hunting\Duck Decoys". The seller is "huntfishgrill" and is located in Rock Spring, Georgia. This item can be shipped to United States.