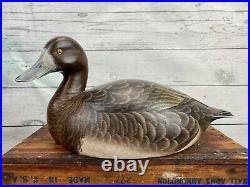 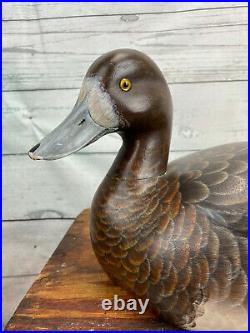 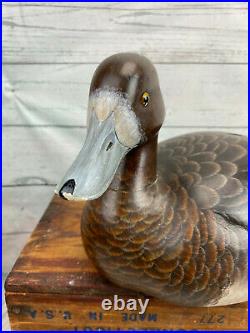 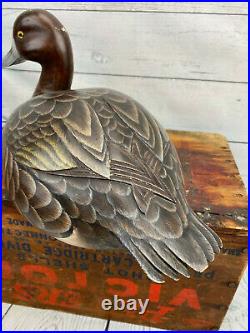 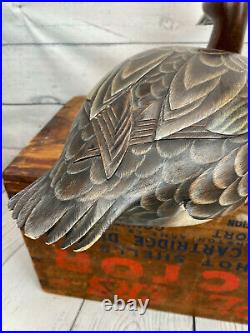 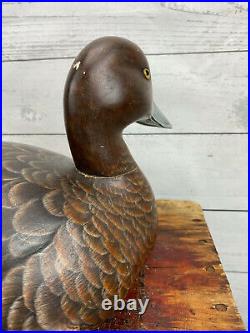 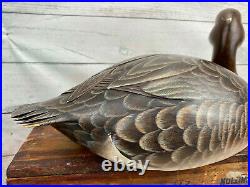 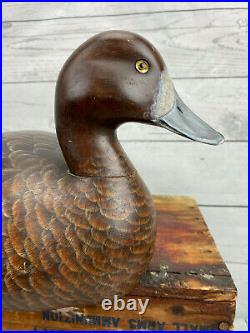 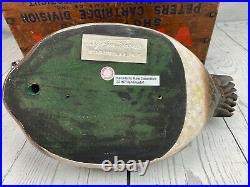 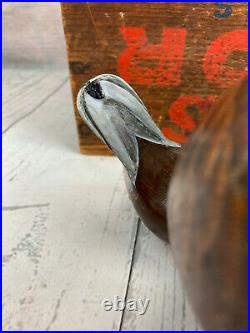 Ken Harris Decorative Hen Bluebill. Very rare decorative hen bluebill by Ken Harris. This decoy is exceptionally well-carved and painted with very fine, intricate decoy to the back and tail.

Head posture is also excellent as is the bill detail, see photos. I have only seen one of these, this one, so don't miss this rare opportunity to add it to your collection! All original, has some chips/wear to sharp edges (tail and bill). I have done my best to document this decoy through both the text above and the photographs. I will do my best to accommodate any and all requests.

The decoy you are seeing is the exact one you will be getting, therefore, there should be no surprises if you have taken the time to scroll through all the photos and read the text. Unless the decoy is listed in 100% original paint, expect some old hunter touch-up.

Almost every single decoy I have for sale was in fact a working decoy part of a larger rig and subject to typical gunning wear including rubs that were typically touched-up between hunting seasons as a way to pass the time during the off-season. Some of these decoys are more than 100 years old and over the course of many hunting seasons it is bound to happen. An excerpt on Harris from the Thousands Islands Museum's Website: Kenneth I. (Ken) Harris Ken Harris was born and raised in Watertown, N. He Was an ardent duck hunter and trout fisherman in his earlier years, and began carving hunting decoys in 1927, in part to disprove the statement that black ducks would not decoy.

As word of his decoys began to spread, Ken began to carve for his friends and then as a part time business. All of the decoys made in Watertown were produced in his basement workshop with the assistance of his wife and two sons. Ken moved to the Woodville area and began carving full time. By 1947 he had moved to his well known location along Route 3, initially using the barn as both workshop and display room. An article printed December 18, 1948 in the Watertown Daily Times stated that Ken and his son William produced over 4,600 duck decoys in the last year.

Around 1963, Ken discontinued the wholesale distribution of gunning decoys to various stores, and concentrated on retail sales at his Route 3 show room. Eight months later, Ken was stricken by a heart attack while checking his trap line. I say most because as you see some decoys will have a modest/fair-market reserve. Call it down-sizing if you will. If a decoy doesn't meet reserve, let's talk.

NOTE: As with most sporting collectibles, along with being a great addition to a game room or home decor, vintage decoys have shown to be a sound investment that seldom decrease in value. Each decoy is truly a One-Of-A-Kind item as no two hand-carved decoys are exactly alike and with so few available decoys from each carver, as time passes, they will surely only increase in value.

Be sure to add my to your favorite sellers/searches. I have many more decoys to add from all regions including the Chesapeake Bay, Ontario, Quebec, Michigan, New York, Illinois, the St. The item "RARE Ken Harris Decorative Hen Bluebill Duck Decoy, Exceptional! NY Carver" is in sale since Sunday, March 14, 2021. This item is in the category "Sporting Goods\Hunting\Vintage Hunting\Duck Decoys".

The seller is "dckhuntr" and is located in Butler, Pennsylvania. This item can be shipped to United States.