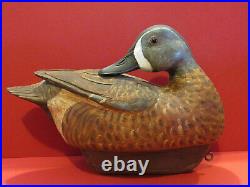 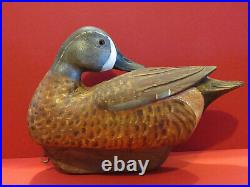 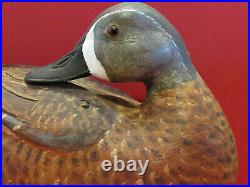 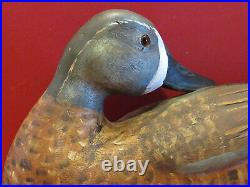 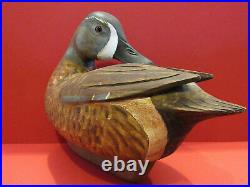 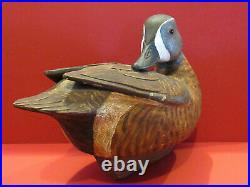 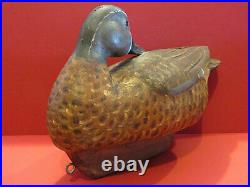 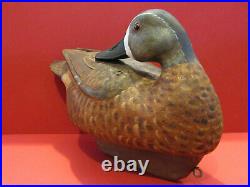 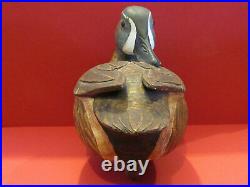 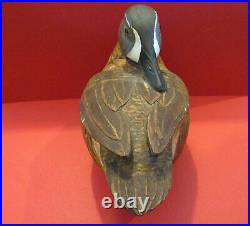 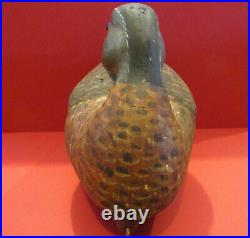 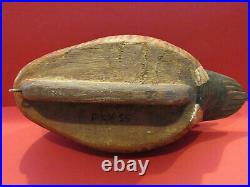 Working Duck Decoy Original Paint by Danny Lee Heuer. My father passed three years ago at 96 years, & he was a master carver of working duck decoys, & many other carvings. Approximate size is, 11" long, by 7 1/2" High and 5 Wide, a full size gunning Decoy. Original carving by my father, Danny Lee Heuer of Sault Ste. Marie Michigan in original working paint condition, 1985. This Preening Blue Wing Teal has been floated & hunted over during the 1985-86-87 Duck Season, by myself & Father. My father and I hunted over this decoy for 2 seasons, of course we were to avoid shooting very close to it!

After the 1987 Duck Season & about 12 or so hunts, this decoy was put on the shelf to join my fathers other rig mates. This decoy joined my fathers "Shelf Decoy's", which after floated and hunted over then became a permanent resident. This was what I call, my fathers "early group" of carved hunting decoys, as his later decoys carried much more detail. He took to more detailed painting of the decoy's in his second half of carving, almost leaning towards a decorative bird. Dad's trade mark was he carved the underside of his decoy bills, a trait from his tool & die trade calling him to detail.

Even though this Duck Decoy is Preening, he still carved out the underside of this bill. Please note that this Preening Blue Wing Teal Drake is featured on that poster! The purchaser of this Decoy will get a free poster of "The Decoys Of Danny Lee Heuer", signed by myself, Daniel F. Also accompanying the poster will be a written history of his Decoys and carving history.

Surprise that someone special in your life, with a gift that never stops giving, a great collectable to join their shelf mates. This item is in the category "Sporting Goods\Hunting\Vintage Hunting\Duck Decoys".duckman66" and is located in this country: US.

This item can be shipped worldwide.