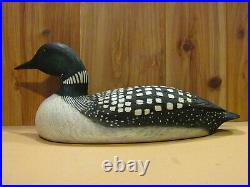 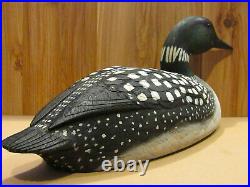 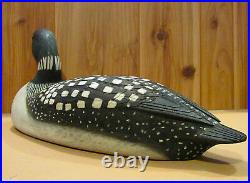 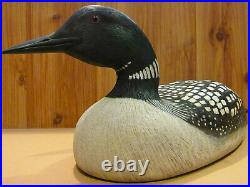 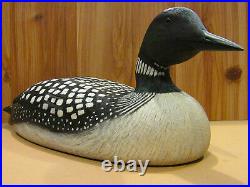 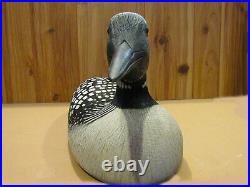 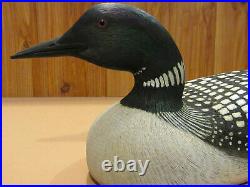 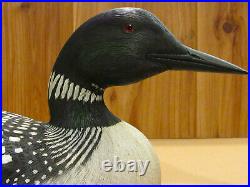 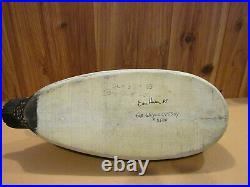 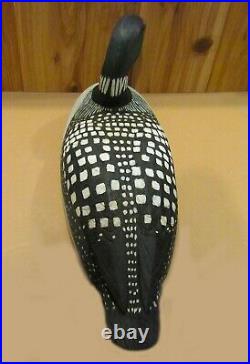 Marie Michigan in original paint condition, 1983. Once completed and while visiting with Dad, I asked him to resign the decoy and he did so in 1985. My father passed three years ago at 96 years, & he was a master carver of working duck decoys, & many other carvings. Approximate size is, 22 1/2" long, by 8 3/4" High and 7 1/2 Wide, a large size carving.

My father met Wayne Gretzky at his house as he had a sign out in front that said Decoys for sale. According to the story my father told me, Wayne had seen this carving when it was about a half completed.

He told Dad to let him know when it was finished and he would take another look at it. I think during that time he was in the Sault Ste Marie, Michigan area on a hockey tour or something like that. He spelled Wayne's name wrong, but for him, close enough I guess.

This decorative Loon carving joined my fathers "Shelf Decoy's", and then became a permanent resident. He really never made any other effort to sell this Common American Loon Carving, I really think he enjoyed it too much. He feather burned all the outlined feathers in this carving, and the pictures do not really do them justice. The purchaser of this decoy will receive a free poster of "The Decoy's of Danny Lee Heuer", signed by myself Daniel F.

Surprise that someone special in your life, with a gift that never stops giving, a great collectable to join his shelf mates. The item "Vintage Common Loon Hand Carved Decorative Decoy by Danny Lee Heuer Original" is in sale since Thursday, February 11, 2021. This item is in the category "Collectibles\Animals\Birds\Ducks".duckman66" and is located in Brimley, Michigan. This item can be shipped to United States.