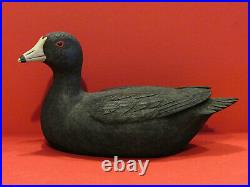 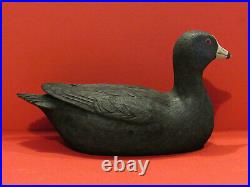 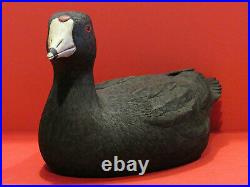 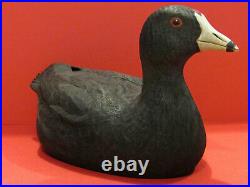 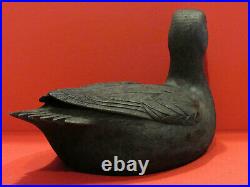 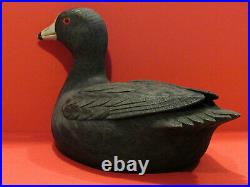 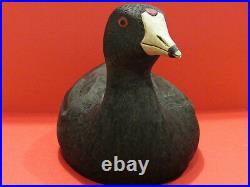 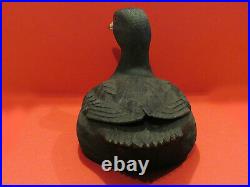 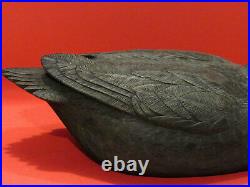 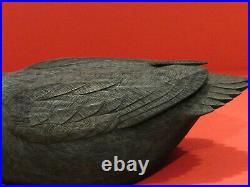 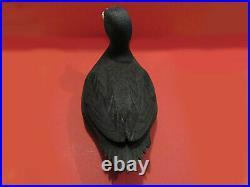 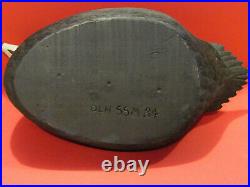 Vintage Original American Coot Confidence Decoy Carving by Danny Lee Heuer LOOK! My father passed three years ago at 96 years, & he was a master carver of working duck decoys, & many other carvings.

Approximate size of this American Coot is, 11" long, by 5 3/4" High and 5 1/2" " Wide, a full size confidence Decoy. A Confidence decoy was put out in the decoy spread, to lure ducks into the spread. Confidence decoys were usually a Sea Gull or American Coot, or A Crow, that made the ducks feel that things were safe. They were widely used, but carved in smaller numbers as usually only one was used per hunter and spread. A true collector is aware of this, and these type of original carvings are.

Highly sought after and hard to find. The reason for this is that they were far and few between, especially original paint and hand carved. This is a Original carving by my father, Danny Lee Heuer of Sault Ste. Marie Michigan in original working paint condition.

This American coot was carved in early 1984 during that winter, and was met to float, but never did. Dad had planed to use it, but enjoyed his newly used technique of burning the feathers and putting light washes on them.

Dad enjoyed this carving, and he used a very early. On this bird, which proved to be very effective for his style. He would burn all the feather veins & once completed, would use light washes of color to establish the color he wanted. This American Coot made it to his private collection of many birds and decoys, and joined it's shelf mates till now. This was what I call, my fathers "early group" of carved. Decoys, as his later decoys carried much more detail. He took to more detailed painting of the decoy's in his second half of carving, almost leaning towards a decorative bird. Dad and I spent many day afield, we enjoyed hunting waterfowl, with his carved decoys, which worked so well.

Those days are long gone for me now, but I lived them, and now wish to share these great works of art with others. Look for "The Decoy's of Danny Lee Heuer", in my store Heuerart for some more examples of his work. The purchaser of this decoy will receive a free poster of "The Decoy's of Danny Lee Heuer", signed by myself Daniel F. Surprise that someone special in your life, with a gift that never stops giving, a great collectable to join his shelf mates.

The item "Vintage Original American Coot Confidence Decoy Carving by Danny Lee Heuer LOOK" is in sale since Saturday, February 6, 2021. This item is in the category "Sporting Goods\Hunting\Vintage Hunting\Duck Decoys".duckman66" and is located in Brimley, Michigan. This item can be shipped to United States.